The city of Rijeka in Croatia hosted the 21st edition of the Balkan Karate Championships for Cadets, Juniors, and U21.

Organised by the Balkan Karate Federation and the Croatian Karate Union, the event gathered over 700 athletes from all 13 countries of the Balkan countries. Representatives from Albania, Bosnia & Herzegovina, Bulgaria, Croatia, Cyprus, Greece, Kosovo, Montenegro, North Macedonia, Romania, Serbia, Slovenia, and Turkey travelled to Rijeka for the three-day tournament.

The delegation of Bosnia and Herzegovina topped the medal table with a tally of 26 awards including 12 gold medals. Turkey and Serbia also registered deserving performances with 24 and 31 medals respectively.

During the event, the Balkan Karate Federation also celebrated its Executive Committee meeting. The decision-making body of the organisation discussed the expansion plans of karate in the region. 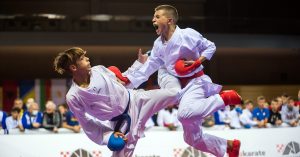