The Italian Karate athletes who claimed medals at the Olympic Games Tokyo 2020 today received one of the highest honours in the country. 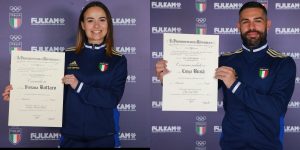 “It is a recognition that will remain with me forever,” pointed out Luigi Busa on Instagram.

Luigi Busa won the Olympic gold medal in Male Kumite -75kg after defeating Rafael Aghayev of Azerbaijan in the final. Meanwhile, Viviana Bottaro claimed the Olympic bronze medal after edging Sakura Kokumai of the USA in the bronze medal bout.