Up-and-coming karatekas cause sensation on Day 1 of #EuroKarate2022

The opening day of the competition of the 2022 European Karate Championships was a celebration of the strength of younger generations in Karate. Up-and-coming karatekas took the spotlight today with impressive performances and major upsets.

Brandon Brian Wilkins of England produced the biggest upset of the day in Gaziantep. The 21-year-old karateka was making his debut in senior continental championships and not only did he qualify for the final of the event in the category of Male Kumite -75kg. The young karateka upset Olympic champion and five-time continental titleholder Luigi Busa of Italy. Brandon Brian Wilkins defeated Karate icon Luigi Busa by 2-0 in the semi-finals.

The other finalist in the category is Erman Eltemur of Turkey. The Turkish karateka wrapped up a successful day for the host country and defeated Hamza Turulja of Bosnia and Herzegovina 3-0 in the semi-finals.

Young and up-and-coming karatekas Aicha Zakia Boussebaa of Hungary and Ivana Perovic of Serbia also starred in surprising performances as they reached the final of Female Kumite +68kg. 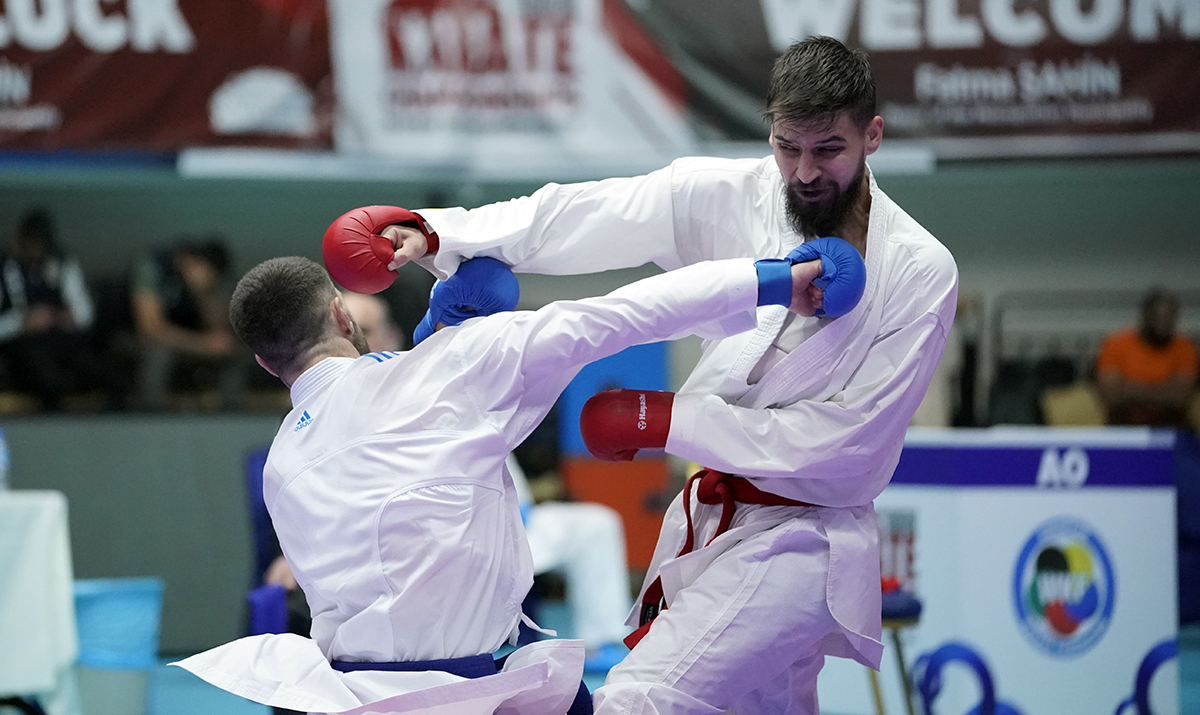 Twenty-three-year-old Bousebaa stunned Nancy Garcia of France 4-3 in the semi-finals and made it to her first-ever final in senior competitions.

Twenty-year-old Perovic upset Lucika Lesjak of Croatia in the semi-finals 1-0. It will also be the first continental final for the 2019 Junior World champion.

Favourites encountered plenty of troubles to prevail in Male Kumite +84kg. Luca Costa of Belgium and Andjelo Kvesic of Croatia proved too strong and will fight for their first continental crown.

In Male Kumite -84kg, Enes Garibovic of Croatia and Daniel Gyorgy of Hungary also shocked the frontrunners to become the new finalists of the category. Garibovic defeated Petar Spasenovski of North Macedonia in the semi-finals 3-0 while Gyorgy beat Walid Deghali of Belgium 2-1. It will be the first continental final for both Garibovic and Gyorgy.

Meanwhile, the title-deciding bout of Female Kumite -61kg will be one not to miss since 24-year-old Anna Miggou of Germany and 29-year-old Ingrida Suchankova of Slovakia will clash for the biggest honour.

Miggou became one of the big names of the day with her qualification to her first-ever final following a slim 1-0 victory over Laura Sivert of France. Suchankova who has three continental bronze medals under her belt beat Anita Serogina of Ukraine 6-1 in the semi-finals.

Turkey and Spain will compete for the domination of Kata in Europe as the two finals of Kata categories will see Spaniards and Turkish karatekas clashing for gold. 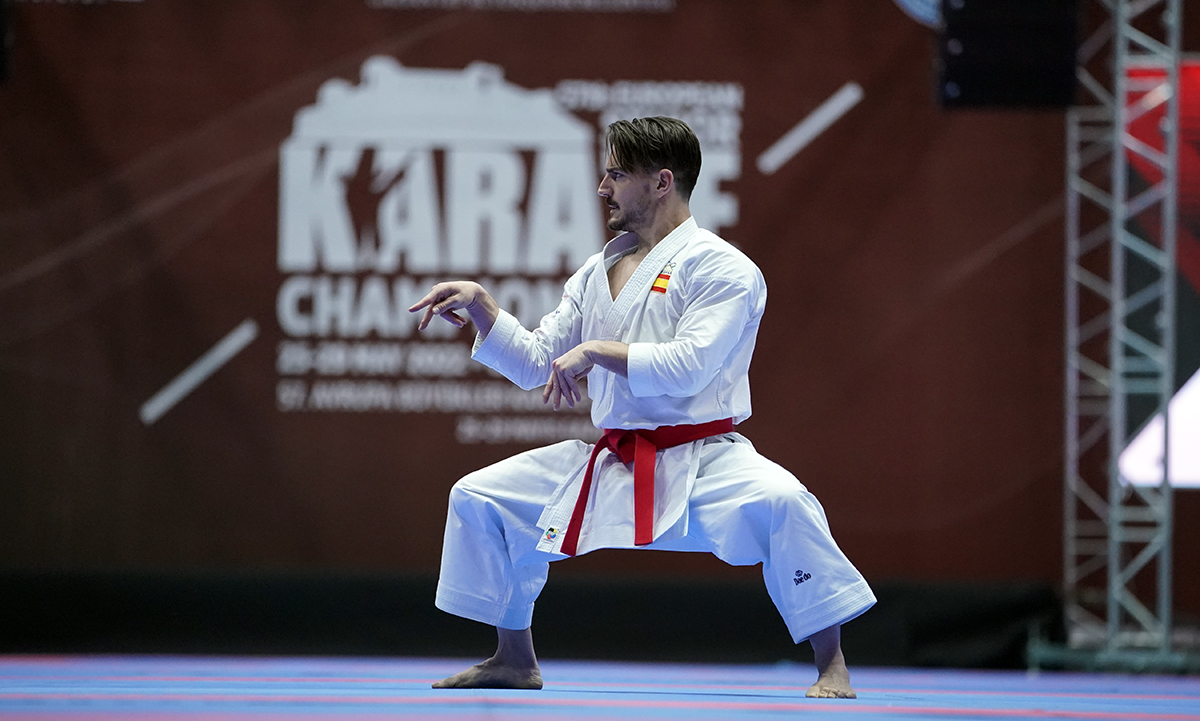 Olympic champion Sandra Sanchez of Spain aims at extending her record-breaking career and will clash for the title of Female Kata after prevailing in the eliminations today. The Olympic, World, and continental titleholder topped the last pool with a score of 26.0.

In a repetition of the continental final last year, the other spot in the title-deciding bout is taken by Dilara Bozan of Turkey. The local hopeful prevailed in the last pool of the round-robin with a score of 24.74.

The final of Male Kata will also be history repeating as Damian Quintero of Spain and Ali Sofuoglu of Turkey will fight for the title.

After producing the big upset last year, Sofuoglu hopes to re-take the title, this time at home. The Turkish Olympian topped his pool with a score of 26.14.

Meanwhile, Olympic silver medallist Damian Quintero is aiming at his seventh continental crown. The Spaniard qualified for the final after receiving a score of 25.96 in the last pool. 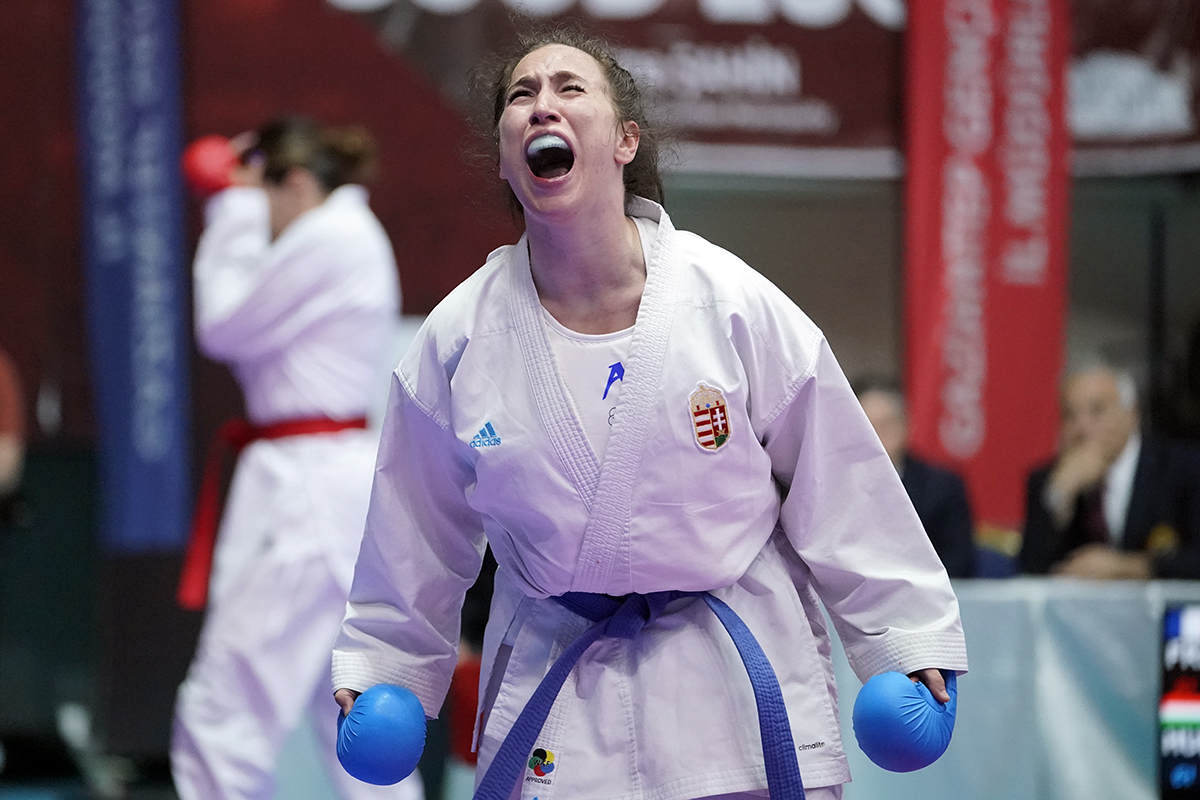 In addition to Erman Eltemur’s qualification to the final and the two spots in Kata, Turkey qualified one more representative to clash for the titles on Saturday. Eda Eltemur made it to her first continental gold-medal bout after upsetting Alizee Agier of France by “Hantei” or decision 0-0 in Female Kumite -68kg.

Her rival in the final will be Miroslava Kopunova of Slovakia who claimed a convincing 6-0 victory over current continental runner-up Vicky Panetsidou of Greece.

The competition continues Thursday with day 2 of action from Gaziantep (Turkey).

CLICK HERE to go to the micro-site of the 2022 European Karate Championships.